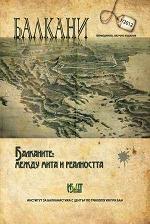 Summary/Abstract: This text is the Bulgarian translation of the Afterword to the second enlarged and updated edition of Imagining the Balkans (Oxford University Press, 2009). Setting the book in the new geopolitical context a decade and a half after its first publication, the author aims at refining the conceptual apparatus of the argument, specifically elaborating further on categories such as balkanism and orientalism, empires and colonialism, regions, Europe and globalization, and specifically the central category of historical legacy. Facing the recent indiscriminate application of the notion of postcoloniality to Eastern Europe as a whole, and specifically to the Ottoman Empire, an appeal is made for the concrete historical contextualization of postcolonial theory. Based on examples from the Ottoman Empire, and Central and Eastern Europe, an exportable theoretical model of “historical legacy” is proposed, which emphasizes the complexity and plasticity of the historical process. Europe, in this vision, emerges as a complex palimpsest of variegated entities — a palimpsest which not only reveals the porosity of its internal frontiers but questions the absolute stability of its external ones.