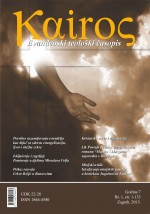 Summary/Abstract: The study of the novel The Master and Margarita is focused on the interpretation and the making of a character that Bulgakov created based on the biblical figure. The analytical method used is a comparative one, and the study integrates a deep comparison of the narration techniques and interpretations of the figure in the light of mystic and occult culture. The comparison between the biblical archetype of the character of Pontius Pilate and the re-creation and interpretation of the character in the novel is not just a dry comparison, but it aims to climb over the culture it represents, Christian culture and ethics, regarding the concept of good and evil. As the narrator of the novel changes focus on different subjects, and since the central figure of the storytelling differs, it was more important for us to study the figure of Pontius Pilate than Yeshua (Christ). We have gone deep into his character by analyzing the remorse, the loneliness and the redemption that the character goes through. An important role in the study is that of the symbols interpreted in the novel’s context such as the symbol of the moon, so oft and powerfully used in the novel. Because the author remade a well known character, we think that the author was aware that the reader would have a culture of imagining it, so it was a great challenge for him to give the reader another Pilate. Bulgakov is very talented in the way he describes Pilate so that the reader considering pre-knowledge about the biblical archetype makes an unconscious comparison.