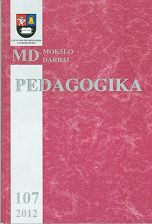 Summary/Abstract: The article deals with the importance of educating und supporting development of national and civic values through the educational process. Theoretical ideas and insights are supported by the analyses of empirical research data on reflection of national and civic values in Lithuanian Social Sciences and Moral education textbooks which were at secondary schools in use in 2007–2008. The research was run by the national team of researchers, educational politicians and social science teachers and it was ordered by Ministry of Education and Science of the Republic of Lithuania. The authors point out that no systematic research on textbooks That would help to reveal what national images and national and civic values dominate at the worksheets and to understand whether the conception of national and civic values that are being conveyed to Lithuanian students are adequate in the context of contemporary society. The major aim of the research, methodology of the empirical research (quantitative as well as qualitative) is presented as well as analyses of the main findings and drawn some conclusions based on this analyses. Using Content analyses (61 Social Science and 13 Vale Education textbooks used in the grades from 5 to 12) the findings did show that most reflected values in social science textbooks for secondary schools are like state independence, rights and responsibilities, patriotism. At the same time identity, responsibilities and duties, tolerance and respect are most discussed values in the Moral Education textbooks.