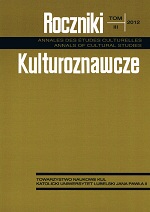 Summary/Abstract: This paper is focused on John Paul II’s understanding of such terms as Europe and its essence, genesis of Europe, its history, contemporaneity and future. According to John Paul II’s teaching Europe was created by Christianity which shaped also its essence (identity) having unique in the world culture-creative power. The papal diagnosis was not only naming actual dangers and strict rejecting of this identity, but also consequences of these processes.