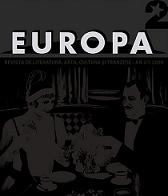 Summary/Abstract: In the period between the wars, spectacular research and experiments took place and created different directions and levels. This is a period when people rise from tensions of political extremists which reflect on social and cultural spheres. A period when young people fear (self)cognition and search for spiritual masters trying to answer metaphysic questions. That was the time of the biggest cultural amplitude with so many new possibilities. Apart from the epoch of the “big classics”, the epoch between two world wars gave many big writers like Nicolae Iorga, Lucian Blaga, Emil Cioran, Mircea Eliade, a whole pleiad of significant thinkers and creators who lifted the standard of Romanian spirit to the level which can be compared to other big European cultures.