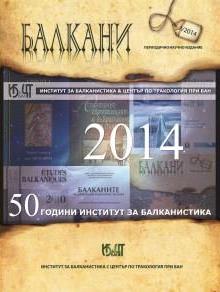 Summary/Abstract: The founding of the Institute for Balkan Studies at BAS (1964) complied with the new level of extension and development of the above-mentioned domain according to its growing interdisciplinary character combining the methods of humanities and social sciences in the investigation of Europe’s southeastern region. At the same time it agreed with the European idea of Balkan cooperation hailed and launched already in the 19th century by many intellectuals from the area. Ever since its beginning the activity of the Institute has gone in several directions: Research on various aspects of Southeast Europe’s development, publication activities, translation and publishing of sources concerned with the history of the Balkan nations); science popularization activities, as well as training of young specialists and researchers in the field of the Balkan studies. International ties and activity have been of major importance already since the foundation of the Institute, and owing to this, it gradually managed to gain authority abroad as well. Hence, the Institute for Balkan Studies at the BAS – today joined with the Center of Thracology – has proved itself through the years as a notable European research center.