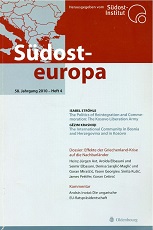 Summary/Abstract: Abstract. This paper analyzes the involvement of the international community in the region of the former Yugoslavia, focusing on the cases of Bosnia and Herzegovina and Kosovo, and on its attempts to foster multiethnic democracies in these war-torn societies. It argues that the prevailing assumption among the international community that democratic and multicultural institutional frameworks would automatically give rise to liberal democracy in the former Yugoslavia, irrespective of the establishment of rule of law, has harmed efforts to create well-functioning democracies and stable societies. Moreover, the paper argues that despite the mantra of ”multiethnicity” propagated by the international administrations in Bosnia and Herzegovina as well as in Kosovo, ethnic segregation has been nourished by applying the principle of territoriality when conferring group-differentiated rights.