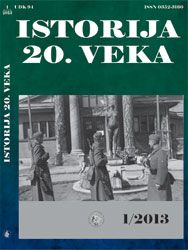 Summary/Abstract: Intimate fraternization with occupying forces was typical phenomenon for all territories under German occupation during World War II. Although it depended on the regime of occupation, number of the occupying forces and general sympathies towards Nazism, it became the most detested form of collaboration. Women fraternization with Germans was condemned since it was considered betrayal of national and patriarchal norms and morals. Cutting of women’s hair became a method of punishing women for intimate relations with German soldiers by Ravna Gora Movement during the occupation. On the other hand, after liberation, People’s Liberation Movement organized trails for women charged for ’horizontal collaboration’. Punishment by cutting hair as well as post-war trails, beside real charges for sexual relationships had, in numerous cases, background in ideological disapproval. Concealing ideology behind sexual charges was an attempt of women gender degradation and deprivation of their right on equality and emancipation. The gender differentiated treatment of collaboration was an attempt to re-establish male dominance and traditional gender roles.