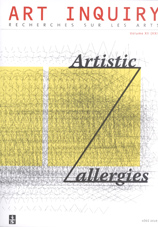 Summary/Abstract: The author analyzes Honoré Balzac’s story The Unknown Masterpiece, arguing that one of the main questions raised by the writer concerns the relationship between artistic theory and practice. He refers to such thinkers as Martin Heidegger, Giorgio Agamben, and a variety of different interpretations of the story in order to show that insofar as art is concerned, theory has a double effect, resembling a pharmakon, a substance which, as pointed out by Jacques Derrida, may have positive and negative influence: it is a positive element, for it actually turns mere objects into artworks, but at the same time it can put limits on artistic practice. The author claims that the feedback between theory and practice can be observed very clearly in Master Frenhofer’s art, which justifies a great interest in this story shared by 20th century artists, philosophers, historians of literature and art historians.