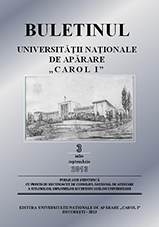 Summary/Abstract: Guerrilla warfare has different dialectics than the conventional one, based on other manifestation of the relation between space and time. While the regular forces operating on conventional precepts relate to space by occupying some areas or battle alignments, following the succession of some well defined stages, guerrilla formations do not look for the control of the space, but for the use of its peculiarities in order to survive and operate in a clandestine way. Talking about time, the regular forces want a rapid conclusion of war, by the fulfillment of the strategical goals, while guerrillas try to prolong the war forever, with the purpose of wearing down the adversary and degrading his potential.