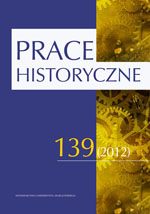 Summary/Abstract: The article constitutes an attempt to interpret one of the newly discovered source texts concerning mediaeval Slavdom, which is William of Malmesbury’s Chronicle of English Kings. The author analyzes a passage devoted to the cult of “Fortune” among the pagan Lutici tribes which is described in a fragment of the chapter ‘De Henrico Imperatore’ devoted to the allies of the empire. The fragment in question concerns the Veletis – the pagan allies of emperor Henry III in the years 1045–1055. On the basis of an analysis of the description of prophesies from the horn of the statue of Fortune, the author tries to justify a hypothesis that the presently missing German source of this fragment (dating back to the middle of the 11th c.) was based on a 15th c. book ‘Diversarum hereseon liber’ by Filastrius of Brixen, an early mediaeval author of the 4th/5th century, whereas the cult described by William of Malmesbury concerned a female goddess with uranic-pluvial connotations (whose proper name had been substituted in the Roman interpretation by “Fortune”) in one of the cities of the northern Veletis.