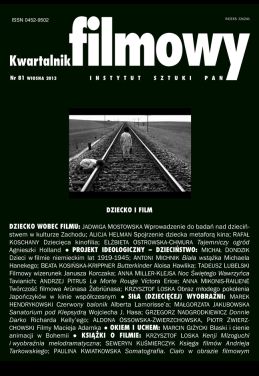 Summary/Abstract: The text is an attempt at religious interpretation of the film "Donnie Darko" (dir. Richard Kelly, 2001) – a production debut, that is now increasingly included in the canon of so called cult movies. The author describes the intricacies of the narrative of the film, and tries to reconstruct its subcutaneous discourse and tracks the signals needed to interpret the title character as a figure of Christ. In this approach Donnie Darko appears to be a character with Christ like characteristics, that travels in time in order to change the order of events, that will otherwise lead to the foretold end of the world. At the same time Nadgrodkiewicz notes that the reconstructed latent discourse does not stand in opposition to the film’s main discourse. Rather together they form a coherent, albeit a perverse structure in which layers of official communications refers to the dark side of the events and the tragic fate of the hero, and the subcutaneous layer allows the assertions about the meaning and purpose of sacrifice that teenage Donnie bears for the sake of his loved ones.