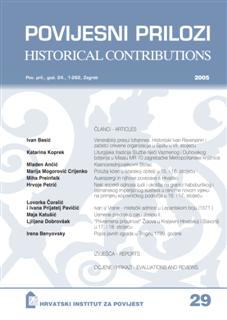 Popis javnih zgrada u Trogiru 1789. godine
The list of public buildings in Trogir from 1789

Summary/Abstract: The State Archives in Zadar hold the list of the public buildings in Trogir dating from 1789, in which the size, function and the condition of the building are described. „The list of public buildings” has a particular value since it contains descriptions of the changes the buildings underwent during the 19th century, both in their physical appearance and in their purpose. This work discloses the entire List with the notes on the buildings and circumstances in which the constructions and reconstructions took place.