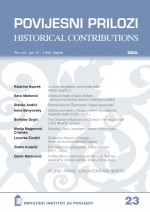 Urbane promjene u Trogiru u prvim desetljećima mletačke vlasti (1420.-1450.)
The urban development of Trogir during the initial period of the Venetian rule (1420-1450)

Summary/Abstract: The article discusses changes in the urban development of Trogir during the first several decades of the Venetian rule in the 15th century. Arrival of the Venetian administration meant that Trogir became part of the centralized and organized state, although the Venetian Republic was not a single entity from the geopolitical and geographical point of view. Trogir kept some particular qualities of its urban development, but it also changed in accordance with the strategical and economic interests of the Venetia. The newly conctructed castle, a military outpost, was identical to castles which were built in other parts of the Republic. The town’s urban characteristics underwent the biggest change in connection with the erection of fortifications, especially the new part of town, nearest to the castle. Locations near the fortifications underwent changes in ownership of real property, which affected urban development during the later period.