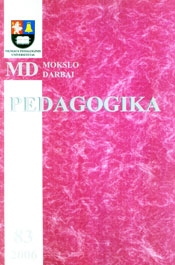 Summary/Abstract: The article discusses the competition between qualitative and quantitative researches which has entrenched in the science of education over the last decade as well as its challenges to methodological culture as to main condition of acknowledgment of educational research results. The mission of the science of education is to reveal what is not known, to manifest new truths, ideas and methods of activity optimisation, to improve the present reality of education and to create a new one; description and explanation of the reality is not enough: the most important goal is to provide ways to improve it. While conducting researches and formulating conclusions, an education scientist may employ such estimations as ‘often’, ‘rarely’, etc., however s/he has no right to guarantee absolute correctness of conclusions and recommendations. In science metrology, cognition objects of similar nature are referred to as low conditioned systems. Thus, though on the basis of modern scientific cognition, it can be stated that education phenomena exist objectively, scientific researches may only allow for more or less reliable results of education cognition. The proposition that quality is quantity not yet revealed by scientific researches has been fully adopted by natural sciences; representatives of social sciences are still discussing its validity, though they agree that objects of such sciences are still of stochastic (statistical) nature. Two approaches to scientific problem solutions have entrenched: statistic and expert, which consequently determined the division of empiric scientific researches into quantitative and qualitative ones. The comparative analysis revealed the following key differences between quantitative and qualitative researches: •The main goal: explanation and prognostication of the object – description of the object and formulation of hypotheses. •Format of the research: insularity- openness. •Attitude to the object: analytic – holistic. •Relation with the context; neutrality of the context – influence of the context. •Character of primary data: quantitative (acquired through measuring) – qualitative (expressed in words). •Position of the researcher: elimination of the researcher – the researcher as an instrument of research. A number of specific problems of research conduct were revealed. Quantitative researches: dependence of processing of primary data on the goal of the reseach; loss of a certain proportion of information during the process of data formalisation; nonconformity of primary data to requirements for analysis applying a particular statistic model. Qualitative researches: emphatically accepted position of a researcher as an instrument of the research; dependence of primary research information on the peculiarities of the language of such data and the language in which the research data is revealed; dependence of application of data analysis on researcher’s ambitions and possibilities...