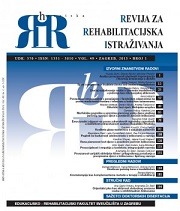 Summary/Abstract: In languages with rich morphological system the acquisition of morphology is complex and time-consuming process. Morphological errors reveal the strategies speakers make during the acquisitional process. Number and type of errors provide the information of the level of acquisition of morphological system with all its subsystems. The aim of this research was to compare the two groups of speakers of Croatian, typically language developing group and the group with specific language impairment to determine if they differentiate in the acquisition of morphology. Additionally, the aim was to determine if these differences can be measured by the analysis of samples of spoken language. Two groups of participants were tested, one with typical language development and the other with specific language impairment. Language samples were elicited by the picture-book Frog, where are you - Mayer, 1969. Data was transcribed and analysed in application CLAN (part of the CHILDES system - MacWhinney, 2000). Two groups did not differentiate in sample size measured by number of utterances and number of words, which is a prerequisite for the applying the measures of language development such as number of errors. Quantitative and qualitative comparison showed differences in two groups of participants, both in number and type of errors. Morphosintactic errors are produced by both groups, but overgeneralisation errors and derivation errors are produced only or mainly by the SLI group.