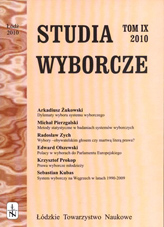 Summary/Abstract: The electoral problems in systems of legal states which constitutional element are elections never loses on meaning. She is more stately the reflection on the breakthrough year 2009 and 2010. In year 2009 walked round 20. anniversary of June elections which were the beginning of system transformation – the fall of communist system. However the mobilization of social strengths in 2010 r. will happen in relationship from approaching voting in council elections and at office of President of Polish Republic. It in present report was decided to move basic questions, and simultaneously current in social consciousness, which it then should consciousness be shape all the time.