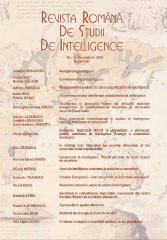 Summary/Abstract: Ten years ago, only a few days after the terrorist attacks which hit US on September 11, 2001, small units of the US Special Forces, plus several CIA teams were already operating in Afghanistan, starting – and later on boosting and coordinating – a quick and decisive campaign which, in less than three months, led to the complete collapse of the Taliban regime. At this very moment, more than ten years after the beginning of the Global War on Terror (GWOT), United States of America, together with the other NATO member states and other allies and partners are deeply involved, at political and military level, in Afghanistan. This massive involvement generates both a significant number of successes and a complex set of problems and worries. The study evaluates the way in which civilian academic think-tanks (mainly universities, faculties and research institutes) can offer the decision-makers (including here the Romanian ones) final product belonging, in a way or another to the category we usually call strategic intelligence. Such intellectual products, if and when are available and are really sound evaluations, can be the solid foundation used to successfully stage an analytical and predictive effort, potentially decisive for both policy making and implementing – at different levels – policies able to cope with the very complex and very fluid situation in Afghanistan.