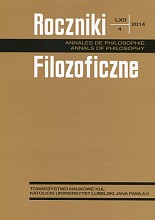 Summary/Abstract: The end of 16th and the beginning of 17th centuries witnessed some very heated discussions on the philosophy of nature. One of the important issues was the nature of matter. There clashed there the tree dominating philosophical positions—the Aristotelian hylemorphism, the emerging modern atomism and, deriving from Paracelsus the chemical philosophy. Of many of the discussed topics a special attention deserves the issue of “occult qualities.” The accepted concept of them turns out to be a distinguishing feature of these philosophical positions. The concept of “occult qualities” is an important one because it shows some epistemological presuppositions that are taken by each of the sides. It is mainly about the relation between intelligibility and possibility of sensual perception of material objects, and the cognitive abilities of human mind. The accepted views are decisive as to how the very concept of “quality” is understood. For the Aristotelians it is a feature that really adheres to the object, the modern philosophers understand it as a relation between the subject and the object, the Paracelsians, finally, interpret the features of material object in a spiritual way.