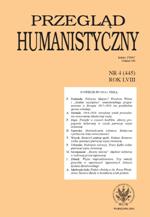 Summary/Abstract: This article presents unpublished so far archival materials related to cultural transfer and cultural mobility during World War I. The empirical case studies are also the starting point to the formulated at the end of this essay revision of the “networking” theories which have recently become fashionable as a result of the spatial turn in the humanities. They all assume that at present the progress of global development cannot be controlled by individual actors, namely the nation states, but it is determined by the constellations of interdependence and networks of references. Economy, politics and the mass media operate along the lines of communication, not along the territorial boundaries of ethnic groups or a national state. Presented materials prove that such a statement may be applied not only to the present stage of globalization, but also to the communication space which was produced during World War I and played an important role in establishing social relations then. Although it primarily came into being in order to administer the occupied areas and for propaganda purposes, the actors of cultural transfer used this space for their own transnational activity.