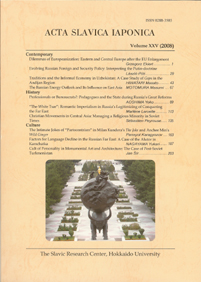 Summary/Abstract: On July 18 of 1863, a circular sent by Pёtr Valuev, Russia’s minister of internal affairs, to the censorship committees imposed restrictions on Ukrainian-language publications in the Russian Empire. In accordance with this document, the Censorship Administration could “license for publication only such books in this language that belong to the realm of fine literature; at the same time, the authorization of books in Little Russian with either spiritual content or intended generally for primary mass reading should be ceased.” The genesis of this circular, which was incorporated into a later act limiting Ukrainianlanguage publishing, namely, the so-called Ems Decree of May 18, 1876, has been the focus of numerous studies. Various historians (Fedir Savčenko, David Saunders, Alexei Miller, Ricarda Vulpius) tackled the emergence of the Valuev Circular from various points of view that appear sometimes complementary, sometimes kaleidoscopic, while covering loosely related aspects of the problem. In this paper, the Valuev Circular will be addressed in the context of the appearance of modern translations of the Holy Scriptures into vernacular Ukrainian, thus expanding conventional approaches to the initiation of prohibitive measures against the Ukrainian language.