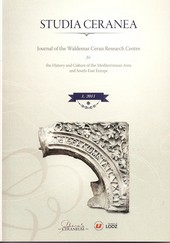 Summary/Abstract: The year 927 brought a peace treaty between Byzantium and Bulgaria, which ended many years of military struggle between both the states. On this occasion Theodore Daphnopates delivered a speech praising the newly concluded agreement. The blame for the accursed war was to put on (already dead) Symeon I (893–927), the then Bulgarian ruler, and his ungodly aspirations to the crown of the Byzantine Empire. It was his personal ambitions that were a real infringement on the God’s earthly order, and it was only and exclusively Symeon, who lead to the appearance of a crack on the House of the Lord. The Bulgarian ruler is referred to as pharaoh, holding the chosen people captive. Symeon is also characterised like various ungodly personages from the Old and New Testament, i.e. Goliath, Ader, Holophernes or even the Devil himself. It can therefore be concluded that Symeon was a usurper, tyrant, sower of discord, murderer, fratricide, and one who committed sacrilege. Daphnopates explicitly writes about his lies, hiding his true intentions, not fulfilling agreements and instability in his proceedings. So, by means of a variety of hints to ancient history, literature and the Bible the speaker present Symeon as a usurper and an enemy of truth, a servant of Satan.