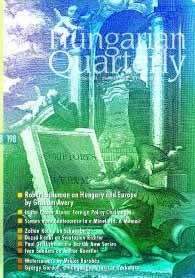 Summary/Abstract: History rarely heeds the neat parameters of a century. Yet a century can turn out to be longer than its years. When it comes to Hungarian foreign policy we can begin around the turn of the 19th and 20th centuries, and hasten to add that the ensuing century was long indeed. The politically wise generation of Ferenc Deák, József Eötvös and Count Gyula Andrássy,1 which helped to form the Compromise of 1867, was superseded by an altogether more self-confident one, which sought not to strengthen the dualist arrangement but to transform—or indeed destroy—it. This ruling class, for the most part, was blithe to the gathering storms in the rest of the world.