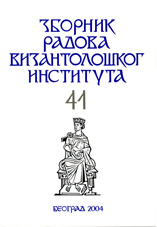 Summary/Abstract: Theoretically, the Byzantine Emperor was, just like in the times of the Roman Empire, chosen on the basis of his personal qualities and merits - by the grace of God, of course. Practically, the factors which determined the ascension of a person to the throne were much more complex, the methods of gaining power being multifarious. In consequence, the political philosophy was confronted with the question of whether it is virtue or origin that defines an Emperor. Independently of this rather theoretical question, however, and despite the claims that the personal qualities are decisive in the choice ofthe Emperor, the origin of the ruler played an important role in the consciousness of the Byzantines of all epochs. This is why great attention was paid to the creation offamily trees, especially in the cases when the Emperor was of low origin (homo novus) or when it was for some reason necessary to strengthen his legitimacy. The choice of the genealogy was not random: since it carried a clear political message, it was of utmost importance with whom the Emperor in power would be associated and whose historical deeds or legendary personality would serve as a moral model. Also important is the fact that the search of a "good family" was as a rule triggered by the need to confirm one's own virtue. Thus, genealogies often reflect a certain system of values, usually emphasizing morality, courage in war, care for the welfare of the country, piety, etc. The choice of the archetype depended, of course, on the needs of the ruler for whom the genealogy was created. All this allows us to consider legendary genealogies as an expression of the imperial ideology.