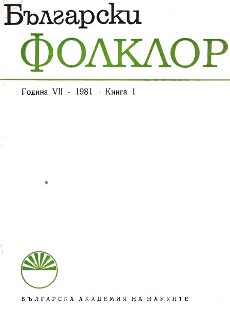 Summary/Abstract: Among the personal contacts of the brothers Dimitar and Konstantin Miladinov with other outstanding figures of Bulgarian National Revival their relations with Georgi Stoykov Rakovski are of special interest. Dimitar Miladinov and Rakovski quickly found a common language in the struggle against the Greek Phanariot clergy. They were engaged in an active correspondence which has now been lost. Rakovski sent Miladinov his works Gorski Patnik (The Forest Traveller) and Pokazalets (Indicator). Two correspondences by D. Miladinov appeared in Rakovski’s newspaper Dunavski Lebed (Danubian Swan). Several letters from Konstantin Miladinov, the younger brother, written in answer to letters from Rakovski, are an evidence of the relations between the two men. (Rakovski’s letters have not been preserved.) Rakovski published in Dunavski Lebed K. Miladinov’s announcement about the forthcoming appearance of the volume of Bulgarian Folk-Songs, the work of the two brothers. Two poems by K. Miladinov were also published in it: Taga za Yug (Sorrow for the South) and Na chuzhbina (Abroad). An editorial note still in Rakovski’s newspaper announced the arrest of D. Miladinov. Rakovski was also the author of an article in French, protesting against the criminal act of the authorities. Rakovski’s association with the Miladinov brothers was a result of the All-Bulgarian Revival, a proof that the struggle which had blazed up united Bulgarians of all parts of Bulgarian lands.