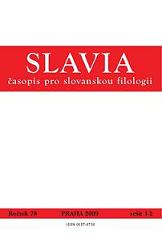 Summary/Abstract: The text presents a part of the research carried out to analyse the stylistic features found in journalistic texts in the first Slovene daily newspapers in the 19th century resulting from the new language function of reporting. The author in introduction deals with the genre of news reports, it is defined as a specific genre within the publication style, almost as a rule occurring in the daily newspapers’ articles dealing with events and developments from those aspects of our everyday life that we find most interesting and that contain elements accessible to our knowledge. This is followed by an analysis of newspaper stock elements and formulae in order to identify how the daily newspapers exerted influence on the formation and standardisation of particular word phrases and text characteristic of newspaper texts. Due to external style-forming factors news reports in the 19th century developed specific journalistic characteristics: a number of set phrases and formulae became established.