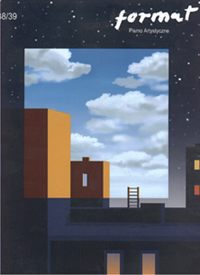 Summary/Abstract: There are three aesthetic results of globalisation: art has become the weapon of the New Enlightenment Project (Franz Kafka, Magdalena Abakanowicz, Jerzy Grotowski, Carl Orff, and Mikołaj Górecki are the symbols of European influence in the world); contemporary art cooperates with popular culture (Marcel Duichamp and Stanisław Lem’ work can be characterised as both banal and refined art); contemporary art uses mass media to popularise metaphysical ideas (Julia Margaret Cameron and Stanisław Ignacy Witkiewicz’s approach towards art can be characterised in terms of self-irony). As the result of globalisation, aesthetic values are associated with the program of emancipation. Such places as Hollywood, Las Vegas, Orlando and New York are the symbols of the New Enlightenment Project. Totalitarian regimes fell, but freedom cannot be easily connected with equality. Witkiewicz experimented with “pure form”, avant la lettre performance, photography, metaphysics, and his own body and brain, which he considered the subject of aesthetisation. The current phase of globalisation can be considered as “the globalisation of nothing”, or, the globalisation of obsessive, constant change and expansion. It is connected with the accumulation of capital, knowledge, and experience which lack the substance. The idea of acceleration is the basis of development. It dominates culture. Cultural institutions, mass media and even intellectual elite groups are united in global networks. Nevertheless, Harvard, Oxford, Sorbonne, and Florence are more important cultural centres than Kairo, Sao Paula, Singapur and Vladivostok. Kassel and Venice are located in Europe. Nobel Prize committee works in Stockholm and Oslo, and not in Zanzibar, Montevideo, Moscow and Shanghai. However, Al Jasira TV station is a free voice in the Arab World. In Tokyo and Johannesburg, people decide about important global matters. The avant-garde art tries to re-habilitate low and peripheral cultural phenomena. Cultural changes are connected with ennoblement of certain artistic styles, such as jazz. Picasso used photography in his work, although he didn’t want anybody to know about it. Contemporary photographers sell their work in established art galleries. Photographs are used as parts of installations. Globalisation contributes to artistic self-reflection. According to some critics, artistic work, such as Urs Luethi’s “Placebos and Surrogates”, and Ryszard Schusterman’s “Performing Live, Aesthetic Alternatives for the Ends of Art”, promise satisfaction, enchantment, joy, comfort, and even euphoria. Such promises, though, are rarely kept. People who visit galleries and museums are rather pragmatic in their opinions. Nevertheless, the global reality includes such ideals as artistic freedom, and individualisation.