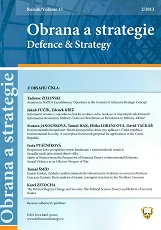 Summary/Abstract: The Alliance’s Strategic Concept as a formal document is a statement in which NATO points out political and military resources and the means of gaining assumed goals. It re-defines basic tasks and rules, determines main features of the new security environment, displays full-scale approach to the collective security and constitutes the background for future reforms and transformations of its member’s armed forces. In the new Alliance’s Strategic Concept the need of engaging NATO out of its border lines, in order to prevent particular threats, is clearly outlined. It forces the expeditionary feature on the Alliance and therefore the respective abilities are required. Those abilities focus on carrying out expeditionary operations; hence one of the leading aspects will be the use of aviation. The paper consists of two principal parts. The first part focuses on the analysis of current NATO’s Strategic Concept in a context of leading its expeditionary operations beyond the area of its responsibility. Attention was drawn upon the essential problems with implementation of expeditionary operations in the future. The second part gives us characteristics of the aviation as one of the key tools in Alliance’s expeditionary operations. The key requirements which the aforementioned forces need to fulfil were presented, as well as the estimated scope of the use of aviation in typical expeditionary operations