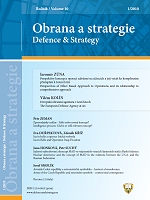 Summary/Abstract: The widely-spread concept of the intelligence cycle is usually considered banal. In fact, it comprises many theoretical and primarily practical issues. The paper newly defines the stages of the cycle, compares the Czech terminology to the foreign ones (namely the English one); aims to denominate some issues and suggests how to resolve them. A significant critical focus of the paper consists in discussing activities that rarely get proper attention: definition of the inputs or the tasking, primary processing of raw information, and finally some of the difficulties regarding distribution of finished intelligence to legitimate users. The paper considers correctness of the concept in the world/environs of defensive intelligence activity. Eventually, the paper confirms that the concept of the intelligence cycle is useful: it reflects a factual distribution of labour within the intelligence agencies and makes the internal self-reflection within them possible.