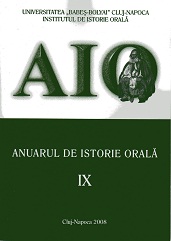 Summary/Abstract: Our research aims to reveal the advantages of the “exile” of memoir literature. In this way these kinds of discourses rebuilt an objective reality and also a subjective one, the narrator’s, both privileged. Corin Braga says that memoirs are subordinated to the logic of time connected to personal trajectory. Nowadays historians, who have to be researchers of memory also, search for truths within personal and collective memory. Personal writings open the doors for historians in recovering History and also for literates in recovering histories. In the special case of Romanian recent past, that of the communist regime, the historian has the chance to search for the witnesses themselves in their memoirs regarded as documents and to confront them to official acts on the premise of correctness and objectivity. Viewed as historical narrations, memoirs allow discovering unique facts revealed by the help of narrative. Placed sometimes at an imaginary border both by literature and history, writings about the self take advantage by revealing the “real” not only the representation if it and historically, they give narrative structure to punctual events. So, autobiographical discourses become fruitfully connected both to literature and history: actors/witnesses of historical events became “writers”, and the capacity to reveal their anger, fury, anxiety connected to the others’ related them to literature. The heterogeneous character of personal writings became particular regarding the benefit of the mixture of species: diary is completed by memories, confessions or letters, memories often convert to confessions, life story becomes a life history, testimony meets confession etc., all of them being authentic human documents first of all. On this regard we can speak about a paradoxical “narcissism of differences” that unify and also divide writings about the self.