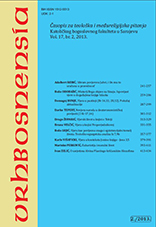 Summary/Abstract: In this brief account the author attempts to make an actualization of the biblical texts Num 14:11; 20:12 in the context of the Year of Faith, launched on October 11, 2012 by Pope Benedict XVI. By observing these texts in their biblical context it is possible to make a parallel between, on the one side, the role of Moses and his brother Aaron in the desert, and, on the other, the role of the Church in the world. Specifically, just as Moses and Aaron did not complete their mission of leading the people into the Promised Land, so the Church alone does not complete its mission of bringing the people into communion with God. It was not Moses and Aaron who brought the people into the Promised Land, but Joshua: in the same way, the one who finally brings the people into communion with God is not the Church or her pastors, but Jesus Christ, who alone brings abundant life. However, the mission of the Church is not to be considered as something limited and closed because of this. On the contrary, the mission of the Church is to keep the door of faith always open.