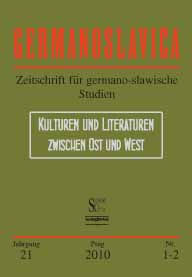 Summary/Abstract: The contacts of the Old Russian language and Middle Low German as official written languages are reflected in contract documents which fix relations between the North-West of Ancient Russia (Novgorod, Pskov, Smolensk, Polotsk, Vitebsk), and the Livonian Order and Hansa. In this article historical linguistic contacts between the two languages are discussed, as exemplified by a Germanic loan meaning in Old Russian îðîóäčĺ [orud'ï ±je] (‘judicial dispute’, ‘action of proceeding’, ‘legal matter’) and by the traditional legal formula äîęîíü÷ŕňč îðîóäčĺ [dokon’üč’at’i orud'ï ±je] (‘to consider case in a judicial order, to take out the adjudication’) related to it. In the parallel passages of the German-Russian contract documents the Middle Low German correspondence seems to be the word sake and the formula sake endigen. In the article the relations between the Old Russian word îðîóäčĺ and other legal terms – Old Russian ň3ćŕ [t'a'ža] ‘action of proceeding, court, quarrel, dispute’, Middle Low German twist ‘tiff’- are considered. In the article the facts are analyzed proving that the word meaning îðîóäčĺ ‘judicial dispute, action of proceeding, legal matter’ is borrowed, despite the fact that the word îðîóäčĺ is not a loan.