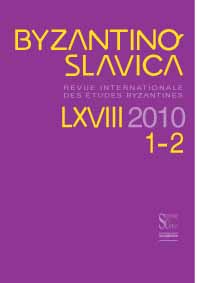 Summary/Abstract: In the 460s, Peter the Fuller was the head of one of the Constantinopolitan monasteries, perhaps the monastery at the Church of St Bassa at Chalcedon. Expelled from that monastery, he went to Antioch, where he acceded three times to the office of bishop, however performing the episcopal duties for a period of no more than five years altogether. His first episcopate began probably at the end of 470 or the beginning of 471, and lasted until the spring of 471; the second one from the summer of 475 until the summer/autumn of 476; and the third one from the beginning of 485 until his death. In his public activity, he was known as an ardent adversary of Nestorianism and a liturgical reformer. His lasting legacy became his innovative addition to the Trishagion doxology, which had soon turned into a watchword for the opponents of the Council of Chalcedon. Peter the Fuller himself, however, does not seem to be an explicit adversary of Chalcedon, being more of a moderate opponent ready to accept the compromise as provided by the Henoticon. The second and third episcopates of Peter were impacted by political issues, even though his generally assumed close relations with Zeno of Isauria appear to have been deliberately overstated by Theodore Lector, who was distinctly ill-disposed towards Zeno.