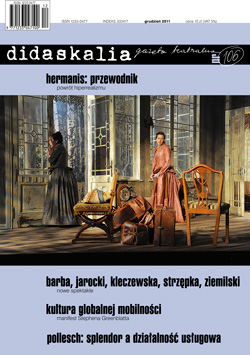 Summary/Abstract: A review of Eugenio Barba’s play The Chronic Life (premiere: 13 October 2011, Jerzy Grotowski Institute in Wrocław) dedicated to Anna Politkovska and Natalia Estemirova – Russian journalists murdered by unknown assailants. Precisely describing the various parts of the play, which she follows Nando Taviani in describing as “imagination in action,” Hasiuk states that “The Chronic Life is a performance about human fate, about individual decisions and the tides of history […]. But also about a Europe of somnambulists and blind men sowing destruction […]; about dirty money used to buy people’s death; […] about the lack of forgiveness, understanding, and compassion. […] This diagnosis of Europe is unsettling to say the least.”