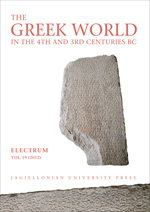 Summary/Abstract: This article attempts to make a critical assessment of the preserved fragments of Thettalon politeia as a source on the history of early Thessaly. The traces of the existence of this text come from the second half of the 2nd century CE at the earliest, but even then it was seen as one of the Politeiai recorded by Aristotle. As a result of this attribution, information from this text is treated as a reliable source of knowledge on the koinon organization of the Thessalians and their joint army. There are, however, important reasons to treat this source with the greatest caution: we have only six short quotations from the work available, and the part which refers to Aleuas’ supposed reforms is very much damaged and has been subjected to a number of emendations by its various publishers. The description of the system of mobilization of the Thessalian army from Thettalon politeia seems anachronistic, and probably arose under the influence of information about the reorganization of the army conducted in the 370s BCE by Jason of Pherae and the propaganda that accompanied these changes.