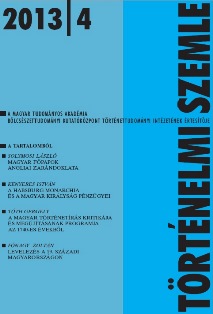 Summary/Abstract: The eminent Hungarian historian, Mátyás Bél (1684–1749), was at first commissioned with writing a preface, and later was involved in the editorial process as well (the compilation of the second and third volumes was probably to a great extent the work of Bél). The prefaces written by Bél are of a crucial significance from a scientific perspective, and it can even be suggested that at least in the second and third volumes these prefaces constitute the most important parts. On the basis of newly uncovered and already well known sources, Bél was the first to make a comprehensive view of the history of Hungarian historiography from the Anonymous to his own age. He thus founded the history of the Hungarian historical writing, and this alone would suffice to label his work as an outstanding achievement in the history of science. Yet at the same time his three prefaces can be regarded as a kind of programme defining the tasks which awaited Hungarian historiography. The elderly Bél, who had during his entire life struggled in order to implant the western erudite or critical history writing in Hungary, directed a devastating attack against the two crumbling humanist monuments of Hungarian historiography, that is, the oeuvres of János Thuróczy and Antonio Bonfini, showing clearly the points where these needed to be passed. These points were, according to Bél, the publication of sources, before all of charters; demythicizing, that is, the rejection of fables, and a rigorous critique of the sources; the establishment of an exact chronology; the ignorance of confessional prejudices and grievances; and finally the inclusion of Hungarian-related foreign narrative sources into the research. Even if this program was not pioneering in all of its elements – after all, several among the propositions had then already been taken up by the Hungarian Jesuit historians – it was nevertheless Bél who summarised and thematised the tasks before the historical profession. The study examines in detail the preparation of the Scriptores, the prefaces of Bél, and his opinions contained therein about Hungarian historiography in general and about individual historical works, as well as his propositions for the renewal of the historical writing in Hungary and their Western-European roots.