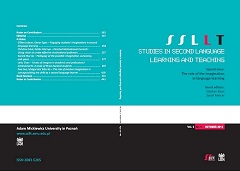 Summary/Abstract: Vision, that is, the mental representation of the sensory experience of a future goal state (involving imagery and imagination), is currently at the forefront of motivational innovation, and in recent years it has been seen increasingly more often in the motivational tool kit of practicing language teachers.Theories such as Dornyei's L2 motivational self-system have explored the power that creating effective visions can harness (see e.g. Dornyei & Kubanyiov,a 2014) and when viewed in conjunction with other current research avenues, such as future time perspective and dynamic systems theory, vision offeres exciting potential. A Directed Motivational Current is a new motivational construct that we suggest is capable of integrating many current theoretical strands with vision: it can be described as amotivational drive which energises long-term, sustained behavior (such as language learning), and through placing vision and goals as critical central components within this construct , it offers real and practical motivational potential. In this conceptual paper, we first discuss current understandings of vision and of Directed Motivationa Currents, and then analyse how they may be optimaly integrated and employed to create effective motivational pathways in language learning environments.