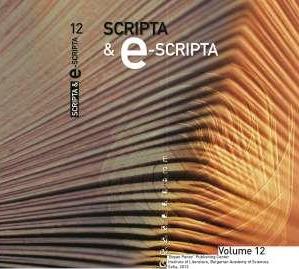 Summary/Abstract: An insufficiently studied monastic florilegium survives in the parchment manuscript No. 382 from the collection of the Hilandar Monastery on Mount Athos. The manuscript is dated to the end of the 13th– beginning of the 14th centu. It was written with Raška orthography, with traces of an earlier Old Church Slavonic protograph. The book was made up of two separate manuscripts (fols. 1–197 and fols. 198–259) with separate pagination of quires. The text of the first part was written in two columns by one scribe. The second manuscript (fol. 198 till the end) is a copy of the so-called Zlatostruj of Tsar Symeon. In the first part of the manuscript (on fols. 1–67) there are texts enumerated from 1 to 154 that are attributed to many authors (by name, if mentioned at all, as most are anonymous): John Chrysostom, Basil of Caesarea, Maximos the Confessor, Hypatios of Ephesus, Hippolytus of Rome, Аnastasios of Jerusalem, Gregory of Nyssa, Pseudo-Palladios, Ephrem the Syrian, Isidore of Pelousion, Theodore the Studite, and others. The article presents results from text-critical analysis of some translated into Old Church Slavonic works in the first part of this manuscript, the study of which is largely due to the kindly provided materials to the author in Hilandar Research Center (Columbus, Ohio, United States). In particular, the following texts are examined 1) Moscow florilegium (Florilegium Mosquense) (fols. 60c–64c); 2) A collection of admonitory aphorisms for moral perfection, in Greek alphabetic order (fols. 64C–66d); 3) Instruction on the gratitude to God and the prayer (fols. 66d–67b); 4) Instruction on the Ten Commandments, only fragments of which are found in Hilandar 382 (fols. 67b–67c-d, no ending); 5) A collection of wise sayings allegedly authored by Nilus of Sinai, a fragment in Hilandar 382 (fols. 59a–60c). The study identifies their Byzantine archetypes, characterizes translation techniques and traces back the transmission of the texts from the time of their creation (probably the middle or second half of the 10th century) to the end of the 16th century.