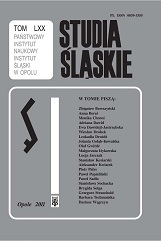 Summary/Abstract: The first names given to the streets of Opole were not of any official character: they were created spontaneously by the residents with reference to the topography of the terrain, neighboring places, municipal objects, professional or national groups. From the middle of the 19thcentury a clear influence of the authorities on the municipal onomastics was visible, which caused a rapid increase in the number of names of the commemorative nature. Provisional political actions resulting from the current demand have also been characteristic of this sphere, manifesting themselves, among others, in selecting street patrons from among personages and events that were significant to the current authorities (they are of the cyclical character and depend on socio-political changes marked out by the successive dates: the establishment of the German empire – 1871, the taking over of power by national socialists, the years 1945, 1950, 1956, 1980 and 1989). Generally, they are connected by the choice of temporary ideological values, whose symbols given personages, social and political organizations, historical events and geographical names linked with them, as well as military formations were). Throughout the whole period following the War, the names commemorating figures connected with Silesia, including national local Polish activists and persons who rendered great services to contemporary Opole made a distinctive group of the street patrons.