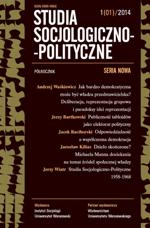 Summary/Abstract: The aim of the article is an analysis of political specificity of tabloid readers–the press which focuses on sensation, targeting less educated audience. The author investigates the real and potential political electorate of tabloid readers. The paper is based on theories of mass culture, political communication (Garbner) and mechanisms of functioning of the public opinion (Lippman, Bourdieu). In tabloids politics is presented as an integral part of modern democratic mass culture and as an object of mass consumption. Tabloids reflect the needs of mass consumption and have become the key means of communication. The patterns of presenting political news are taken over by new media. Research on quality indicates that in tabloids the image of the world of politics, and particularly its elites is cynical and populist. If it comes to the values they demonstrate the mix of values of national and social state. Tabloid readers and people who do not read at all are more politically alienated, less competent, but present more authoritarian and anti-democratic attitudes. Their individualism is lower, but stronger social conformity and weaker need to have their own opinion. The social and psychological profile of tabloid readers is explicit, however it is difficult to associate them in a determined way with the electorate of a particular party or a politician. The results of the analyses are discussed in the perspective of theory of transformation of the public sphere by Jürgen Habermas. Habermas indicated that making politics public by commercial media causes that the public sphere ceases to be a field of debate over political issues. Taking part in it is a kind of consumption, where a ready product is presented to the public–this may be a view or opinion in an easy to consume “pseudo-attractive” form. This criticism of the “mediated” public sphere is still of some value. However, tabloids expand the sphere of public communication into socially excluded electorate and the electorate of Poland B, moreover in the form of sensation they fulfill the control function of the press.