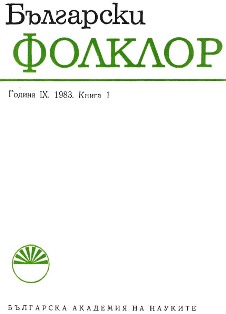 Summary/Abstract: The article presents an attempt at raising some questions regarding the analysis of the Bulgarian folklore culture as an artistic system. A subject comparatively unknown to our folkloristics has been given consideration here, namely the graphitic pictures from the towns of Pliska, Preslav and Madara created during the 9th-11th c. The author tries to establish diachronically the relation between these earliest forms of folk art and the so-called classical state of our folklore tradition from the end of the 19th and the beginning of the 20th c. The comparative study of the graphitic pictures and of the later folklore materials (rites, songs, tales) with the means of structural-semantic and structural-semiotic analysis allow us to trace the development of a set of folk ideas, which have for centuries survived within the system of the folk artistic culture. The concrete analysis reveals the peculiar multiplication of the informational codes of the folklore culture, as well as the specific character of the preservation and the transmission in time of the folk ideas. Being one of the three major spheres of artistic activity in folklore (T. Iv. Zhivkov, People and Folksong, S., 1974), the folk material arts are presented by all the features intrinsic to the entire culture: popular character, artistic merit, collectivity, anonymity, variability, etc. What is more, in certain periods of the historical development of this culture they are the only heritage preserved and might be of inestimable help to folkloristics in clarifying a whole range of more recent folklore phenomena. All these aspects of the folkloristic approach to the medieval graphitic pictures demonstrate convincingly the need to include the folk material arts within the field of research of our folklore science.