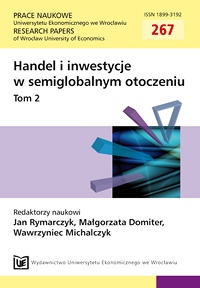 Summary/Abstract: The generalised system of preferences (GSP) of the European Union is one of the oldest and biggest systems of trade preferences, regulating trade rules between developed (the EU) and developing countries. Since the 70’s the system has been evolving to adjust to international economic state of affairs and situation in countries being beneficiaries of the GSP. In 2011 the European Commission presented a proposal for new regulations applying a scheme Powszechny system preferencji celnych UE – w kierunku nowych rozwiązań 71 of generalised tariff preferences from 2014. Among the main new proposals are: preferences of the GSP will be restricted to fewer countries, new graduation rules as well as higher flexibility in classifying countries as ‘vulnerable’ and granting status of the GSP+ beneficiary. New regulations provide also remaining, with some modifications, of existing motivation system of GSP+ as well as EBA initiative addressed to the least developed countries. Those proposals reflect also a shift in the EU approach, according to which the EU wants to replace unilateral preferences to some developing countries with a new bilateral agreements, addressing more strongly interests of the EU countries.