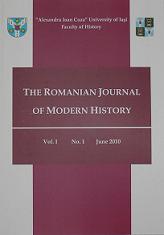 Summary/Abstract: To study death and the phenomenon of dying means to be put in the situation of having to deal with the bodies of the dead soldiers. A history o dying is first of all a history of corpses, of rites and of manifestations towards the cadaver. Much more, World War I brought the problem of death and the image of the hero-corpse among the subjects of cultural history, allowing an anthropological perspective within analysis. If the main characteristic, common to all wars is violence, the Great War distinguishes itself by the huge number of casualties it caused. It was for the first time in the history of humanity that soldiers have fallen victims of modernization to such extent. The consequences of industrialization, initialized in the second half of the 19th century and continued in the first half of the new one, marked the Great Conflagration negatively. The different and improved battle technique, the huge number of soldiers involved and especially the new sophisticated armament used in premiere – the tank, lachrymatory agents (popularly known as tear gasses), technically improved cannons with increased power, battle planes and ships equipped as never before – are just a few of the ingredients transforming battlefields into cemeteries, holding insufficient space for the corpses of the dead. The particular impact of this important event was felt, first of all, at the level of collective mentality, marking the sensitivity of the entire world. The shock this war produced and the changes it brought both to the fighters and to the contemporary population persisted long after the conflagration ended. Similarly to what happened in all the states involved in the Great War, the Romanian society was negatively staggered by the big number of causalities, highlighting the Romanian State in its incapacity of dealing with the problem of both human loss and lack of eternal burial spaces. The feature of modernity The Great War benefitted from permitted continuous fighting, high precision artillery and aerial raids, all making the retrieval of cadavers almost impossible. The hypostases in which the dead soldiers’ corpses have been captured by modern devices such as photo-camera and mass media, determined deep mutations at the level of collective sensitivity. The Romanian society, traditionally giving a huge importance and respect to the dead body, and in which the rituals accompanying death and burial are complex and compulsory as of Christian belief, was horribly blotched and stupefied by the terrible images from the battlefield and hospitals. The Great War gave space more than ever, to the development of photography, both at a professional and dilettante level, it becoming an official instrument which served the memory of the dead. The pictures then taken and preserved up to the present moment, represent the most important and used sources of historical evidence for the analysis of cultural history.