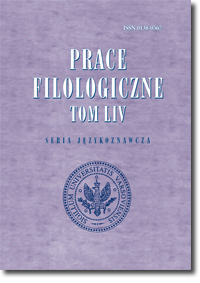 Summary/Abstract: The situation which in Polish is referred to with the concept of ‘guilt’ and which is described by means of phrases such as wina X-a (wobec kogoś), że P; X ponosi winę za P; X winien P/ że P can be explained as ‘a person X by doing something or by abstaining from doing something caused an undesirable state of affairs P as a result of which a person Y suffered some damage’. Besides this core meaning, there occur peripheral elements in the situation of ‘guilt’: an unpleasant mental state of person X caused by doing P (guilty conscience) and the relation of obligation between person X (who has done something evil) and the person who has suffered some damage (requirement of compensation). Individual components of this situation are differently emphasised (profiled) in Polish and Russian. Different lexemes or specific uses of the same ones are used to perform this. The aspect of ‘having a guilty conscience’ is indicated by the Russian adjective виноват and the Polish phrase czuć się winnym wobec kogoś. The aspect of ‘obligation’ is indicated by the Polish adjective winien (guilty) whose meaning changed over the years from the meaning of ‘committing an offence’ to ‘being obliged or indebted’.