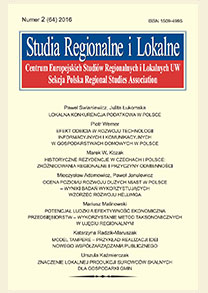 Summary/Abstract: The purpose of this article is to establish whether regional convergence is present in Poland in terms of GDP per capita. An analysis was conducted for the years 1995–2005 at the voivodeship (NUTS2), sub-regional (NUTS3 classification) and intra-voivodeship levels. Convergence means a reduction of income disparities between regions. The opposite phenomenon is called divergence. The author of the paper used a method – proposed by Quah (1993, 1996a, 1996b) – that enables an analysis of the full distribution dynamics of relative per capita income. It consists in the estimation of transition matrices derived from Markov’s processes and in the use of nonparametric kernel estimators of the relative density function for relative GDP distribution per capita in subsequent years. The method facilitates verification of the club convergence hypothesis, which is impossible using the classic methodology (Barro and Sala-i-Martin 2003). It is clear that income distribution is stable and that there is no unconditional convergence both between voivodeships and between sub-regions. In general, voivodeships as well as sub-regions were impoverished as a result of a faster-than-normal growth of the richest voivodeships (mazowieckie voivodeship) and sub-regions (large cities, mainly Warsaw and Poznan). The diversification of relative GDP per capita grows in time both in the case of voivodeships and sub-regions. The convergence model that can be seen both at NUTS2 and NUTS3 levels is club convergence (polarisation): relatively the poorest and – separately – the richest regions are becoming similar and converge at different income levels. The analysis also includes the occurrence of sub-region convergence within voivodeships, with the only observable convergence model being club convergence.