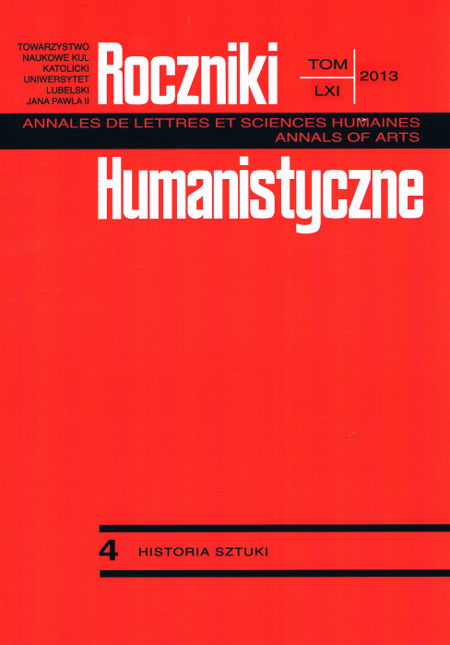 Summary/Abstract: Peter Cavallini’s painting has been thoroughly studied by distinguished Italian researchers and many world experts on Italian painting. Analyses of this great artist’s style have been conducted in the context of maniera greca, which is obvious taking into consideration time and place of the development of Peter’s painting skills. Almost the same reason, that is the place of birth and the first years of education connected with Rome, became a proof for those researchers who perceived Cavallini’s creative activity as one of the earliest developed ways of the return of Proto-Renaissance to ancient traditions. It is also confirmed by the fact of Cavallini’s cooperation with a sculptor Arnolfo di Cambio and, which has been confirmed as well, by parallel to Giotto’s endeavours to create his figures as sensual, full of internal life people or groups of people arranging authentic events. All the previous research is extremely important in order to ask a question concerning the way of elaboration of a body and human corporeality by Cavallini what makes that his figures are internally filled with life and reveal their emotional and spiritual expression. Cavallini did not imitate the anatomical ideal of a body but he did not copy Byzantine figures, either. His efforts to paint the body and corporeality in its complexity of external connotations as well as internal psychological conditioning, often adequate to a situation, constitute a new pursuit which is a result of a new spirit of an epoch around the year 1300, the time when Cavallini lived, worked and achieved the graetest painting successes. In this approach towards a figure as an individually elaborated corporeality differences between Giotto and Cavallini can be observed in spite of many similar interests like, for example, in drawing three-dimensional spatial illusion, which has meticulously been studied by researchers. Research on the manner of depicting human corporeality in art has basically referred to modern art, however, there are also approaches concerning medieval art (Urszula Mazurczak, Human corporeality in medieval Italian painting, vol. I, Lublin 2012, there extensive discussion of the state of research). Cavallini’s carnality reflects human emotional states which are exposed by means of: eyes, pupils, eyelids, a mouth, lips and, finally, gestures and moulding of the whole body presented in motion. All those factors are matched by clothes whose fabric emphasises the body. In his approach to the matter of the body Cavallini was not a follower of maniera greca, however, he did not stop at ancient sculpture as the external shape of figures. Cavallini ‘fills’ his ancient statues with internal spirit, energy and life.