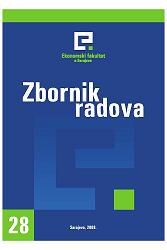 Summary/Abstract: This aim of this paper is to portray the evolution of international trade theory from liberalist conceptions dating back to the 18th century up to the present day, employing a new approach of classifying and comparing the ways the most important theoretical frameworks engaged with the impulse towards international trade. Namely, various models which can be roughly divided into two main camps of conventional (traditional) and more recent (modern) international trade theories, have emerged in the attempt to answer the same set of questions: Why does the international trade develop? What is its structure, what are the benefits? Employing the classification and analytical methods (primarily descriptive and comparative analysis), this paper seeks to examine similarities and differences as well as advantages and flaws of these various conceptual frameworks, while establishing their respective contribution to the overall understanding of the causes and rules of international trade. The research demonstrates that, while international trade theory is most developed in its quantitative segment, none of its numerous concepts is universal nor does it fully explain world trade flows and trends. These concepts however succeed in explaining certain segments of international trade, that is - of the trade in certain categories of products, and are thus mutually complementary.