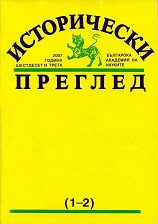 Summary/Abstract: The faction of Boris Sarafov's adherents – the so called sarafists, was an essential element of the overall ideological and organizational division of the Internal Organization after the suppression of the Ilinden-Preobrazhenie Uprising. As an independently functioning faction albeit within IMARO sarafism lasted until early 1907, when his leader was included in the composition of the Temporary representation of the Organization abroad. The rise of sarafism is a result mainly of the deep institutional crisis which affected all levels of the hierarchical structure of IMARO in post-Ilinden period. Unlike the other factions in the Organization, albeit widely using phraseology borrowed from the leftists, Sarafov's faction did not have its own specific ideology. B. Sarafov's activity was mainly defined by personal motivation. Despite the absence of a strong ideological programme, however, sarafist faction plays a significant and in some revolutionary areas – a vital role. Sarafism is unique among the other factions in IMARO that occurred after the defeat of the Ilinden-Preobrazhenie Uprising. Without a formal break with the Internal Organization, it had a high level of detachment, followed its own tactical line and maintained direct, fully independent contacts with the Bulgarian government. Only the inclusion of Sarafov in the leadership of the Organization led to gradual fading of the independent activities of his followers.