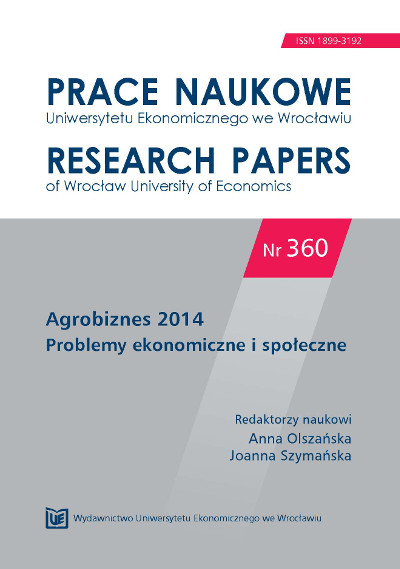 Summary/Abstract: The aim of the article was presentation and analysis of activities undertaken in the first priority axis of RADP 2007-2013. In that axis there were undertaken eleven activities which were enriched in 2010with new activity about natural disasters. The research was conducted according to realized tasks in terms of qualities and material (finance). The comparison of tasks involved into the program to the number of issued decisions let observe towards the end of 2013 fully completed tasks about farms’ modernization, the start of young farmers and the increase of added value. On the total amount of 257,1 thousand applications the Agency adopted 186,2 thousand positive decisions (72,2%). The financial analysis of the program indicated that the planned quota was exceeded in case of structural pensions, in other activities all payments may be realized until the end of 2015. The means of the European Fund were 29,8 billion PLN and during the realization 15,8 billion PLN was spent (52,9%).