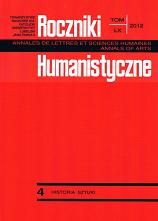 Summary/Abstract: Although still nature did not enjoy a lot of prestige as a genre of paining in the 17th century Seville, it still accompanied many scenes that had a religious or lay character. With time, it even gained an autonomous status and some popularity, resulting rather from decorative reasons. It was to be ensured by presenting various objects made by man, but also appetizing articles of food and beautiful, colorful flowers. It was in this convention that, among others, works by Francisco de Zurbarán and his son Juan, Francisco Barranco or Pedro de Camprobín y Passano were painted. A feature typical of Seville painting was also the use of the language of symbols in still lifes, especially in religious context, like in Zurbarán’s paintings. Historical circumstances connected with the spreading famine and the plague gave still life a new function. It was to satisfy the longing for the lost wealth of life, showing full of taste and beauty still lifes, like in the works by Pedro de Medina Valbuena, Cornelio Schut and Andrés Peréz. The toll of the black death also inspired artists, however, to paint works emphasizing the briefness and futility of human life, that were a message of a didactic-moralizing character, which culminated in the paintings by Juan de Valdés Leal and his son Lucas.